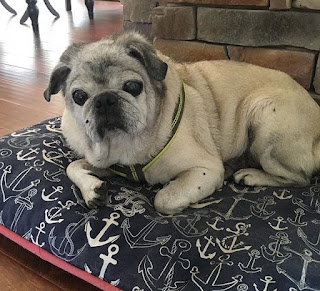 He leaves behind his Master of 16 years, Jordan Frahm, of Asheville, North Carolina, his human parents, Randy and Amelia Frahm of Rockwood Tennessee, sister, Tabitha Frahm of Huntsville, Alabama, and many aunts, uncles, cousins, and close personal friends.  He was preceded in death by his feline sister, Mocha “Mokie” Frahm.

Charleston was a registered pug, born near Raleigh, North Carolina. He was chosen from a litter of his siblings and adopted by the Frahm family in honor of Jordan’s 11th birthday. He was the family’s first pet dog, and will be his human mom’s last.

Charlie Chew spent his puppy and young doggie years in Apex, North Carolina on Dutch Elm Drive where he was a much-loved companion to the Juris, Robtoy, and Smith neighbor children. It was a humorous surprise when her Michigan relatives finally met the neighbor a young Reagan Robtoy constantly chattered about, and were introduced to a tail-wagging pug.

Charleston did not confine himself to Dutch Elm Drive, but whenever possible would roam the entire Fair Oaks sub-division where he was well-known and mostly well-liked by the entire community.

He was a sociable pug that liked to party, loved to eat, and was always willing to help his Mom with fundraising and book promotion events. It was at one such event, that he came out of the proverbial dog house closet and howled he was gay. His admission was lauded by everyone present, especially the Sioss family dog. Although short in stature, Charleston liked big boy dogs

Charleston attended Western Carolina University where his ugly good looks and lovable personality captured the attention of student artists. He was a natural in front of the camera and became a sought after model.

Upon leaving Western Carolina he traveled extensively across the Southeast. He was always up for a road trip, but when left behind he was happy to check in for some pampering at Petz Pack in Madison, Alabama.

Charleston’s snorts, snores, tapping toenails, wagging tail, and even his inability to obey some commands, stinky gas, and constant shedding will be missed tremendously. May he Rest In Peace.

In memory of Charleston Chew his family asks that you give your own pet an extra treat.
Posted by Amelia Frahm at 6:21 PM No comments: