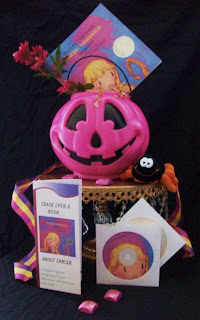 Once upon a time a long time ago, (my daughter used to insist all stories must begin like this) there was no Tickles Tabitha character.  Pumpkins were orange and talking to young children about cancer was more frightening then a Halloween without candy.

Then I was diagnosed with breast cancer and October has not been the same since. At our house it became Pink Pumpkin Month and I spent it promoting cancer awareness and marketing Tickles Tabitha's Cancer-tankerous Mommy, my children’s picture book about cancer.

My kids did not just pick out and carve up traditional orange pumpkins. We were purchasing cans of hot pink spray paint, dollar store trick or treat sacks we filled with a pink ribbon craft activity, and making scarecrow hats that looked like Tickles Tabitha.

One year our kitchen was the laboratory where a giant plastic pumpkin head was padded, molded, and turned into a larger than life-sized Tickles Tabitha’s head.  The top section of the Tickles Tabitha costume character my children volunteered to dress up as (I'm doing what my kids call my evil laugh here) and that helped introduced my cancer awareness school program.

I was reflecting on all that has changed during my recent appearance at the Barnes & Noble Walk With Sally Book Fair.  When my own children were small, talking to them about my cancer raised eyebrows and talking to other peoples children about it was unimaginable.

So much has changed and much of it due to October being Breast Cancer Awareness Month.  Today cans of pink spray paint are not necessary, you can  purchase pink pumpkin jack-o lanterns at the local super market.

Probably due to inhaling that pink spray paint.
Posted by Amelia Frahm at 9:50 AM No comments:

One thing about breast cancer is you can never get too comfortable. I kicked off October with a trip to the doctor's office. A bug had flown into my ear and I wanted to make sure it was out.  All of it!

My doctor assured me the bug was long gone and nothing to worry about, but when I asked her to take a look at a lump near a lymph node she immediately made me an appointment with an Ear Nose and Throat Specialist.
After the ENT guy examined my nodes, mentioned scheduling a full body cat scan, vaporized my perpetual hunger, and told me that he felt better about the one node because the one on the other side was about the same size,  I directed him to the node I was worried about.

As it turned out that node was not a lymph node, but an enlarged cyst.  If it gets infected or any larger it will need to be removed, he told me. Or he could go ahead and  remove it  "NOW"  and prevent me a possible return trip.

I thought about it for a nano second.  What I thought was, unless he put me under and combined a cosmetic procedure with that needle and knife he would be wielding, I would take my chances.

So far my odds have been pretty good, at least when it comes to breast cancer.  Eighteen years of remission  and counting...   Happy Breast Cancer Awareness Month!

Posted by Amelia Frahm at 10:52 AM No comments: