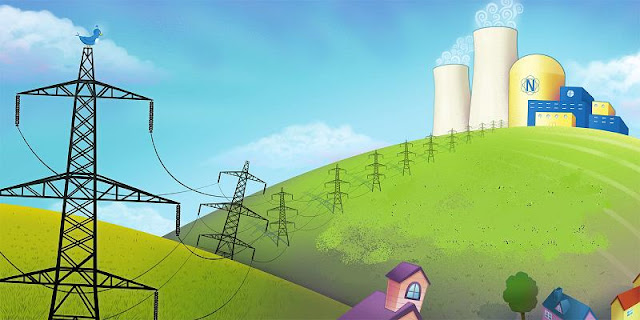 At the Nukie Nuclear Power Plant, inside the nuclear reactor that sat beneath the big dome, a whole lot of fissioning was going on.  Where did it come from?  Where did it go?  Everyone who lived nearby was curious to know.
This is the opening page of How a Nuclear Power Plant Really Works, the children’s picture book I’ve been working on for the past several years.
I never imagined the entire world would be watching Japan and asking these same questions.
My heart goes out to the people in Japan and I feel for Americans trying to obtain information about loved ones who are there.
Like everyone else I’ve been glued to the TV watching the nuclear emergency unfold hoping to hear facts not speculation. 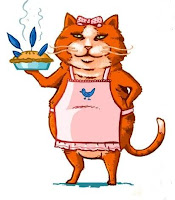 Instead I’ve been struck by how this real life nuclear crisis is mimicking the pages of my children’s picture book.
In the book a chubby white lab rat and a pretty blue bird have a skewed sense of how a nuclear plant works. They speculate, exaggerate and blame everything they don’t understand on their arch-enemy –a cat named Penelope.
I’ve made a career advocating the importance of talking to children about cancer and as one of my colleagues put  it, “Why on earth would you want to write a children’s book about nuclear power?”
Because I believe that fear, whether it’s of cancer, nuclear power, or a cat named Penelope, is fueled, not by nuclear power, but by a lack of knowledge and misinformation.
In 1981 I graduated from the University of Florida with a Public Relations degree and was soon hired to work at a nuclear power plant that was under construction in Bay City, Texas.  It was after the Three Mile Island Incident and during the Chernobyl Nuclear Accident.  I had stepped right in a deep pile of doo-doo.
One of my responsibilities was to create a school program for elementary children. It was the perfect assignment for me because in order to educate the students I first had to educate myself.  It wasn’t easy.
Those familiar with the nuclear industry know that nuclear engineers like to use mathematical formulas, measure anything they hang, and everything they do or don’t do has to have been designed and calculated at least 10 times on paper prior to execution.  I’m the creative, polar opposite, but it was the nuclear industries tenacity for such things that convinced me to become an advocate of nuclear power plants even after I quit receiving a pay check for it.
Long before 9-11 the nuclear industry required security clearances and emergency preparedness plans.  When I left the nuclear industry I was astonished to learn other industries did not.
Despite my history working at a nuclear power plant and the children’s book I’m doing about it, I am not, nor do I claim to be an expert on nuclear power as it pertains to what's happening in Japan.
There are differing levels of expertise.  I want to make that clear-- I am considered a pioneer in cancer resources for children and by virtue of my experiences known as an “Expert,” but I would never claim to be a medical expert on cancer.
What I do claim to be is an expert at making difficult subjects fun, entertaining, and easier for children and their parents to understand, digest and talk about.
Much of my publishing success with Tickles Tabitha’s Cancer-tankerous Mommy I owe to lessons learned during my nuclear plant days.  Parents I noticed would use their children as an excuse to visit the nuclear plant.  Now that I'm a parent, I understand, we're only as smart as our children think we are.  Children I noted were only as frightened as the adults around them made them feel.
When I worked at the South Texas Nuclear Project I longed for a more creative format to present my school program.  As writers know, once you get an idea you can’t let it go.
Several years ago I began working on a children’s picture book about nuclear power plants called:  How a Nuclear Power Plant Really Works. It's the book I'd wished for when I was working at the nuclear plant presenting school programs.  My creative take on the brochure that most nuclear power plants hand out.
It’s become increasingly evident by what’s taking place in Japan that nuclear power is a topic we'll be discussing in the days to come and something we all need to know more about.

Amelia Frahm helped pioneer cancer resources for children. She’s the owner of the Nutcracker Publishing Company, author of the award winning, Tickles Tabitha’s Cancer-tankerous Mommy, co-author of How we became Breast Cancer Thrivers, and creator of Crack Open a Book! cancer education curriculum.
BUT....the first children's school program she did was about nuclear power plants.  Several years ago she decided to write what she had wished for back then, a creative, entertaining book to pique children's interest in nuclear power plants. Nuclear Power:  How a Nuclear Power Plant Really Works!  is scheduled for release Summer 2011 or  pre-order it  now from the publisher.
Posted by Amelia Frahm at 9:12 AM No comments: