Much has changed since the October day in 2001, when Tickles Tabitha's Cancer-Tankerous Mommy debuted on the Rosie O'Donnell Show.  Many of the obstacles I faced back then no longer exist, and are the source of amazement, and amusement to the Millennial and under generations.

The technology such as print on demand, our children take for granted was not possible then, and getting a book published could take months or even years.

Publishing houses often had their books printed in China, and for authors, the phrase slow boat from China was literal.

In 1994, when I was diagnosed with breast cancer, it was not the norm to talk to children about it. We barely spoke above a whisper about it when talking to our adult friends.

Tickles Tabitha's Cancer-tankerous Mommy was the first children's book to touch on issues like a mom's depression. Or picture a tired and moody mommy. Its honest portrayal was a taboo topic. 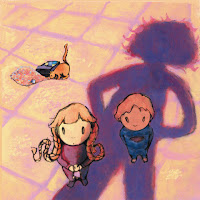 When Rosie O'Donnell advocated for cancer awareness on live TV, her mere mention of a children's book about cancer opened the door for social acceptability.

There were very few resources available about living with cancer, even for adults.

One that could be found at the oncologist's office was Coping with Cancer Magazine. Unlike other publications, handed to me during my diagnosis, it offered stories about people who were surviving cancer.

How I survived publishing my first children's book, while coping with a cancer diagnosis is the subject of my own survivor story, featured last year in the printed version of Coping with Cancer.

This year, I'm happy to help them announce that the new Coping with Cancer website is up and running, and includes a digital version of my story:  After Cancer: Discovering the Life I was meant to Live.

I feel like that old Virginia Slims cigarette slogan should be applied to non-smoking me: "You've come a long way, Baby." I sure have! So have children's picture books!
Posted by Amelia Frahm at 1:22 PM No comments: