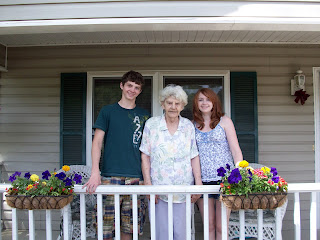 In a year wrought with emotional upheaval, my mother-in-law Shirley Frahm was as always a pillar of strength, and after everything I’d gone through with my own mother, I did not want to miss an opportunity to let my husband’s mother know we loved her.

So shortly after writing my Mother’s Day Blog, my children and I drove down to Raeford, North Carolina, from our home in Apex, to visit her. I had to call first, because even at age 82, Grandma Frahm had several volunteer jobs, and a work ethnic that put people half her age to shame.

This would be our last visit before she was diagnosed with lung cancer, and I am so grateful I did not put it off. It was one of those times when I was trying to gift someone else, but in hindsight the gift was mine.

Our family matriarch died at her home Sunday morning, August 17, 2008 surrounded by the love of her family.

None of us were surprised she died on a Sunday as only Heaven could prevent Grandma Frahm from attending church. The world lost a good woman, and I lost an extraordinary mother-in-law.

Etched in my mind is how her eyes sparkled with amusement, the first time we met, in the kitchen of her house, as all nine of her children, the grandchildren, and a few family friends, traipsed in and out of the back door, and were proudly introduced to the girl, her middle son brought home from Texas.

My niece, JJ, was just a child back then, but she had such an expression of curiosity, reassurance, and pity on her face- I knew immediately I would love her- she got that empathy from her grandmother.

By the time we sit down, to say grace I had realized my future mother-in-law didn’t raise just one outstanding child, but eight others as well. After almost 20 years of being a part of the Frahm family, I still feel that way, and that is the miracle of Shirley Frahm.

I did not grow up in North Carolina, and very few of my Southern Baptist family members got to meet my devout Catholic mother-in-law, but boy, were they curious, and in awe of the woman who sired nine children, and one of them, a man capable of loving me.
I have always told them, “She’s they type of woman who raised nine children successfully, and could have raised nine more with one hand tied behind her back.”

Despite my admiration, it was not until March 26, 1992; I truly reciprocated the depth of my mother-in-law’s love. That day I gave birth to my son Jordan, and it finally clicked how difficult it must have been to entrust someone you love so much to another woman, how heartwrenching for her, and what a gift she had given me. Could any woman ever love the man as much as I loved that precious baby boy? I doubted it.

Grandma died with her tongue in tact, but it had to have been calloused from all the times she bit it and/or held it. She had a gift for diplomacy, and the ability to be nonjudgmental which I see in my daughter, Tabitha, and an innate goodness she passed on to my husband Randy, and son Jordan.

She also bestowed upon all nine of her children her arrogant good looks. Neither she nor her children are arrogant people, but they are a proud family, and never prouder than when they are all together. It can be a bit much for anyone not related to us, and some of us who are. As one of the younger family members pointed out recently, the Uncles are much nicer than they look.

Due to his arrogant good looks, I didn’t see my future husband’s innate goodness immediately. I had a Public Relations job at a nuclear plant, in Bay City, Texas. On numerous occasions I had bumped into Randy in passing, had nodded, or said hello. He had not as much as blinked acknowledgment. (I finally understand. My epitome came while raising our son.)

Outside of work, I couldn’t help but notice him at the local beach, he had a colorful catamaran, and he, and his boat were always surrounded by at least a half-dozen bikini clad sailboat groupies, which I presumed explained his conceited behavior.

While out with friends at a local club one night, an acquaintance, asked if he could introduce me to a friend of his who would like to meet me, and pointed to Randy. The poor man received an earful of wrath. I told him in no uncertain terms not to bother, as I had seen this guy around, and found him vain, condescending, and arrogant.

I was a 28 year old working girl, and friends, colleagues, most of my family members, and I had concluded I wasn’t marriage material. I wasn’t exactly looking for love when Randy walked up, and demanded to know why I would think he was arrogant.

I had never heard him speak until that moment, and it was the deepest, sexiest voice I had ever heard, and to my surprise- because I just knew he was from up North- he had a southern accent. It was before Thanksgiving, and he explained he was on his way home, to Raeford, North Carolina. Somewhere during our conversation he went on to drawl the words that changed my opinion of him, and ultimately my destiny, when he told me he was looking forward to going home and eating a slice of “my mamma’s pecan pie.”

A simple little sentence, he doesn’t even remember took my breath away, for in it he conveyed the love, admiration, and respect he had for his mother, and I knew intuitively this man would respect me too.

It would be months before we were seriously dating and a year later before I would accompany him home to Raeford at Thanksgiving- to meet Shirley Frahm, but when anyone has ever asked me when I thought I fell in love with Randy – my mind goes back to that night, and the way he said, “my mamma’s pecan pie” and somewhere in my journals I have written this down for my children. Along with the unsolicited advice, that the best indication of a good man is his mamma.
Posted by Amelia Frahm at 6:36 AM No comments: