Do Something Meaningful: See YOUR Calling! 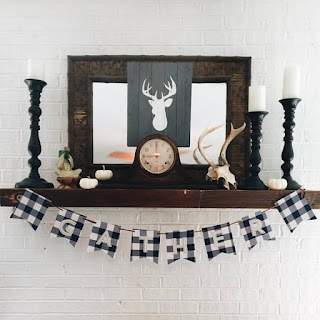 Surfing through my Instagram feed I saw that my entrepreneuring friend Elizabeth Braswell had taken on a new venture, so I scrolled through to see what she was up to this time. The beautiful photo above and the following post caught my attention:

Sometimes that thing you're called to is just staring you in the face...day after day after day. This was our mantle for two years. A white buck. A gathering sign. A clock. The time had not come yet...but when it did it came fast and furious. If  I was a betting girl...I’d bet some of you are sitting on couches and club chairs...journaling and contemplating that call on your life...and it's probably right there...in front of you...staring at you until at just the right time you SEE IT. Like really...REALLY see it. #mountainlife#lodgelife #whitebucklodge....Elizabeth Braswell

From the couch where I was sitting I rolled my eyes and thought to myself, “You’re so full of it!”  and felt annoyed because… well,  I had been contemplating my life, feeling in limbo, and at odds with myself! Only my calling wasn’t right in front of me. My life was just never that easy.

Feeling piqued, I returned to the article I had been working on for a cancer awareness magazine.  There staring at me in the words I had written and reread a few hundred times was my own calling and mantra for 2017.

This is not a new calling for me, and a few paragraphs later I had also written an explanation for why I all too often choose not to SEE IT!

What I thought I wanted and what I was meant to do were often at odds. 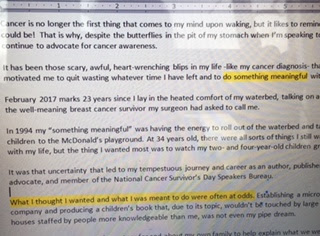 January doesn’t just usher in a new year for me, but also my Breast Cancer Anniversary.

This year it will be 23 years since I was first called to Do Something Meaningful and got shoved by cancer down a path to becoming an author, publisher, speaker, and advocate.

In 1994 my Do Something Meaningful meant watching my children grow up, and if –God forbid– I didn’t get to, to leave them something that would remind them how much their mother loved them.

There were days when Do Something Meaningful meant having the courage just to get out of bed and face the world. (🎶 Mama said, there’ll be days like this…) So much has changed, but this still holds true.

This year I have resolved once again to quit wasting whatever time I have left and to Do Something Meaningful with it. Meaningful is such a beautiful word, and like art its beauty and significance is in the eye of its beholder.

This beholder plans to write more often, worry less, and try to find the courage to get out of bed and do what I was meant to do even though it’s all too often NOT what I thought I wanted!

The awe-inspiring Elizabeth Braswell and her husband Keith, traded rat race for slow pace, city life for mountain life, titles for time, stress for rest....Now they are following their calling and RE- igniting a mountain lodge in Moravian Falls, North Carolina. Follow their journey at WhiteBuckLodge.com.

More info about me, can be found at Nutcracker Publishing.Com
Posted by Amelia Frahm at 11:08 AM No comments: