That’s the controversial question asked in the fall edition of Talking Story, an e-newsletter for educators. Talking story is published by authors Carol Baldwin and Joyce Moyer Hostetter. Most of their readers are teachers, media specialists, or homeschool parents.  They stuff every issue with links, books, learning activities, GIVEAWAYS, and people related to a particular theme.

I’m radiating with happiness to announce that one of the people featured in their newsletter’s fall edition on radiation is Andrew Handley!  Andrew is the talented, young graphic designer who illustrated my children’s book, Nuclear Power: How A Nuclear Power Plant Really Works! 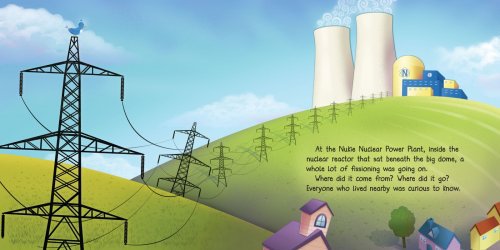 According to Joyce, the goal of Talking Story is not to promote one opinion or another about radiation, but rather to encourage students to take a look at the use of radiation in medicine, energy production, warfare, etc.  They hope to stimulate students to thoughtfully consider the various ways radiation is used in our society and to connect them to literature and writing activities on the topic. 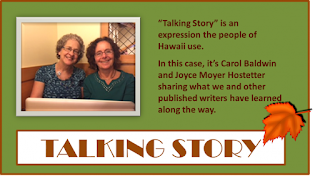 This is what I love about writers and authors like Joyce and Carol who are also educators.  Whether they agree with a topic or not, they understand the importance of allowing a child to learn about it.

After all, one way to learn about, understand, and give an educated opinion on a topic is to study both sides of an issue, right? Who wouldn’t want a child to do that?

As I have discovered during my career as a children’s book author: Plenty of people!

So many that when Joyce contacted me regarding using the illustration featured in her newsletter, I ran a google search on both her and Carol before replying.

Community relations and educational school programs on nuclear power plants like the one I had created and administered in the 1980’s were no longer deemed necessary.

This came as a surprise to me.  Elementary education was well funded back in the days I worked in the nuclear industry. We fielded requests not only from schools, but all types of civic groups who were interested in learning how the local nuclear plant worked.


Back then nuclear power was a hot topic, (pun intended) but this didn’t make the information I was required to teach any less yawn-provoking.  The book I eventually wrote—and Andrew so brilliantly illustrated—is a creative spin on a brochure I used to hand out to my students.

Nuclear Power: How a Nuclear Power Plant Really Works! is the type of book I had wished for back when I was doing my school programs about nuclear power plants.  I wanted to pique the interest of children who didn’t always grasp the technical, but responded to art or stories.  (Kids like me.)

I had forgotten all about this book idea, until 2002 when my family moved from Minnesota to North Carolina where not too far from our home was a nuclear power plant.  While other children spent summers at the beach, mine got visits to the nuclear plant.  (This is where my children would insert what they call “my evil laugh.”)

The book had been work-in-progress for years by the time I hired Andrew to illustrate it, and started to seriously market it.  What most laypersons do not realize about publishing a book is that sales, marketing, industry reviews, and a host of other things begin years before the book is actually published.

It was during this time that I decided there just wasn’t enough interest in my book to justify publishing it.  I told my husband I was going to pay Andrew for his work, and just forget about it, until the “nuclear renaissance” that was often mentioned in the media actually happened.  Maybe then there would be more interest.

The words were hardly out of my mouth when Japan was hit by a tsunami, and the Fukushima nuclear accident occurred. If ever there was a time children might need, and parents might want an explanation about how a nuclear power plant worked, I thought that might be it.

I soon discovered not everyone felt the way I did.  I can laugh about it now, but try to imagine spending years on a story you wrote for good intentions, and then being publicly bullied for it on social media.  Most of my critics had never even read the book. I know this because at the time they commented the book had not been released to the public yet.  The only way to obtain a copy was via its author …that would be me.

So when Joyce contacted me regarding permission to use one of Andrew’s illustrations from my book, and said their next issue was going to be titled Radiation: Friend or Foe?  I ran a quick “friend or foe” google search, and immediately (before they could change their mind) responded that I was more than grateful to her for addressing the topic without prejudice. Then I gave myself permission to glow… with happiness. 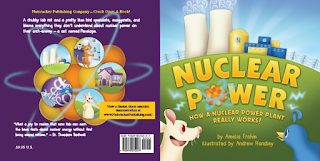 Posted by Amelia Frahm at 8:57 AM No comments: