Up on the Roof Top: Promoting Nuclear Literacy!

Part two: The Perils of a Small Independent Children’s Book Publisher and Author.

Despite the power failure that blew out the lights during our first public appearance in East Tennessee, the Nutcracker Publishing Company’s children’s book characters still radiated! The city of Kingston, Tennessee’s City Council awarded Nutcracker Publishing Grand Prize, or what they called the Mayor’s Award, for our parade entry. 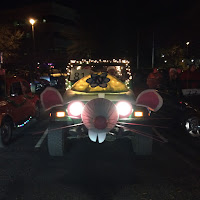 We invested the prize money we received from our award in a larger, more powerful inverter and prepared to shine our literary brilliance on the Secret City of Oak Ridge, Tennessee--  A pro-nuclear city if ever there was one!

Needless to say, our white lab rat from Nuclear Power: How a Nuclear Power PlantReally Works! could hardly wait to light up his larger-than-life hard hat and promote nuclear literacy for its citizens. 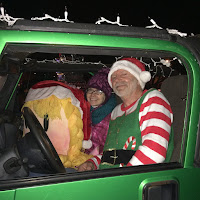 We arrived early and got to work transforming my son’s green jeep into Chubby the white lab rat.  This time, my husband Randy was our driver. He’s also our in-house electrician, and he was going to make sure the lights did not dim on this parade!

So, of course, after wrapping the jeep in Christmas lights, we plugged in our super-sized inverter and it DOES NOT work!  I should be writing TV sitcoms instead of children’s books, because this is the sort of thing that always happens to us.

Randy rushed to the store where we had purchased our inverter and where I’m sure the guys empathized with his need to appease his crazy wife and bring back an inverter that actually WORKED! This would be the fourth time he got me an inverter and he wouldn’t leave the store until they tested it out and he was sure it would light up a tractor-trailer-- not to mention a jeep. 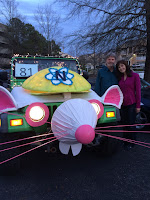 By the time he got back to the parade venue, my daughter Tabitha and I had Chubby dressed, Tickles Tabitha ready to wave, bookmarks and enough parade candy to sicken Santa ready to distribute. We watched as Randy connected the inverter and turned on the lights… which glowed magnificently!

Tickles Tabitha climbed onto the rooftop of our jeep (a.k.a. Chubby the nuclear lab rat) and just as I had hoped parade bystanders in the Secret City of Oak Ridge were blinded by nuclear literacy radiance-- 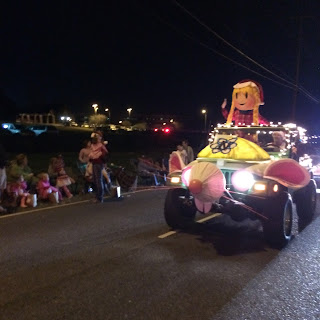 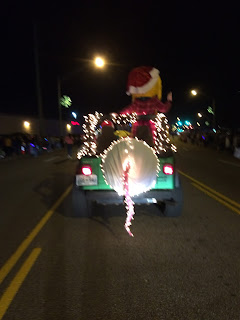 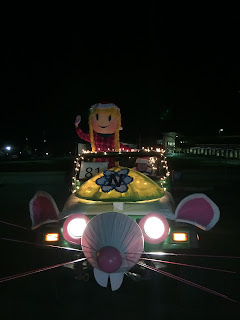 That's the end of  this tail!

Posted by Amelia Frahm at 3:25 PM No comments: