Recently my family went to Granbury, Texas to unite with our children’s God Mama Rita who flew in from California, and her daughter Tushi, and family who reside in Granbury.

Granbury is where Randy and I were married, Tabitha was born, and we purchased our very first home together. 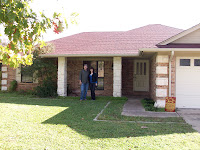 Twenty years ago I sat in that house’s living room on my pristine white sofa, excited and terrified as I wondered, how in the world I would be able to handle having a baby. Marriage was one thing, but a baby would be with me 24/7.

“You’re not going to be able to take a crap without that baby handing you the toilet tissue,” God-Mama Rita had laughed.

I was used to my independence, having my alone time, AND-- I liked it.

There was a reason I had a white sofa and it was because I didn’t expect children to be sitting on it. I didn’t dislike children, however, I will admit to surveying a restaurant’s dining area… even while pregnant, and informing the wait staff if they valued a tip to seat me as far as possible from any screaming brats.

These days the cries of screaming brats evoke only my sympathy and a touch of jealousy as my own brats are all grown up.

Only yesterday it was the new Millennium and I was in Minnesota, tucking my Dimple Dumpling, a.k.a. my son, Jordan into his bed covers, and asking, “Who’s the best little boy in the whole wide world?” He would reply, “Me!” Then at his request, I would fold his blankie “like a hamburger,” and tell him, “sleep tight, and don’t let the bed bugs bite you on the butt.” Then pinch his butt, and as he lay giggling, I would go to his sister’s room where Tabitha, a.k.a. my Baby Doll would ask me to sing her song. “I have a pretty Baby Doll her name is Tabitha…T –A-B-I-T-H-A… I would sing… off key. A song first devised to help my daughter learn to spell her name.

My Baby Doll began her first day back to class in 2010, as a college junior, and in June, the best little boy in the whole wide world will graduate from high school.

Today, I’m home in North Carolina, sitting on a leather sofa that’s a strategic shade of brown in a living room that could fit the entire footprint of our first home. My children have grown up to be competent, open-minded, independent young adults, and I often have to pinch myself I’ve been so lucky.

Yet, everything and nothing has changed. Once again I am both excited and terrified as I wonder how I will manage without those disruptive babies I selfishly thought would be an imposition to my alone time as they now began their own adult lives.

“You like being alone, you’ll be fine,” God-Mama Rita has advised me.

I now realize how excited and terrified Rita must have been when she moved from California to Texas. She left behind her grown-up baby boy to begin a new life with a charming, mischievous, man named Henry Orozco. Missing her own son, she took pity on the young, single guy who had the good fortune to move in across from them—my husband Randy.

Our lives have been blessed time and again by the advice of this amazing, self-less, sometimes crazy, devout Catholic, woman. God-Mama Rita enters this decade without self-pity and without her Henry. Her husband, our God-Papa Henry passed away this summer.

“Life goes on,” she told me through tears, “it’s the way God intended.” 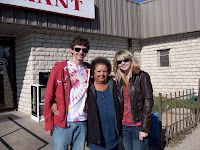 So for God-Mama Rita, and all my other excited, terrified women friends as we face our future. May this be our best decade yet. Happy 2010!
Posted by Amelia Frahm at 6:46 AM 1 comment: