My millennials, who had returned to the roost, figured out their next venture and flew off. Tabitha flew to Thailand for a programs internship.  You can read about her adventures on her blog: Keeping Tabs

Jordan flew to Costa Rica to hone his Spanish
and teach English as a second language.

Although I love them both with all my heart and cried big fat crocodile tears when I dropped them off at the airport, I was not unhappy to see them go! I will never not worry about them, but I am happy that they are happy and they left with my blessing.

It brought back memories of my own departure from the small community of Walnut Hill, Florida. I couldn’t wait to leave home and see the world.

That experience is why I always advised my children to see the world while they’re young and unencumbered. Pretty much the exact opposite of the advice my parents gave me!

After college the Peace Corps was not encouraged, and becoming a flight attendant (my original career goal) wasn’t feasible for lack of demand. So I hightailed it to the most exotic location I could get away with—Texas!

For the female millennial who finds this definition of exotic unbelievable and/or hysterical, it’s only because you have never been expected to find a husband prior to finding a career, advised that your best possible career options were nursing or teaching, or were turned down for employment with degree in-hand because the company you applied to didn’t need any secretaries.

When I graduated high school in 1977 I was encouraged to marry a doctor, not to become one. Young women were just beginning to do things like enlist in the armed forces.

At my parent’s house, the mere mention of traveling outside the paradise they fondly (and embarrassingly) referred to as Solomon’s Happy Hill Farm was just proof that my brain was damaged at birth. And while my brain damage was common knowledge in my immediate family, they didn’t want the neighbors or the rest of the world to know.

As a child I once overheard my father exclaiming to my mother that, while he was pumping gas at the local gas station, a woman who appeared to be educated and decent was purchasing gas while traveling from out of state—and she was traveling alone! My farmer dad cultivated chauvinism like he did soybeans. There were some things decent women just didn’t do, and traveling across the country without a male chaperone was only one part of a long list.

I couldn’t wait to leave home and become indecent.

You would think at age 56, I would be impervious to the guilt heaped on me by my parents, but nope. I’m sandwiched between my son complaining that I’m a helicopter parent for expecting him to check in from Costa Rica, (his sister is keeping tabs) and my parents who blame me for their grandchildren not being in the United States of America.

My mom: Have you heard from Jordan?
My white lie secured via Instagram: Why yes… He’s doing his practice teaching.
Reality: Has Hades had an ice storm yet?
It’s not lost on me that my own children often offer me a large helping of exactly what I fed my parents when I was their age.

If only guilt was as sweet as the cream horns I crave. 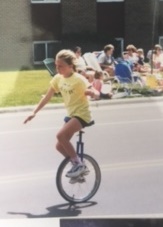