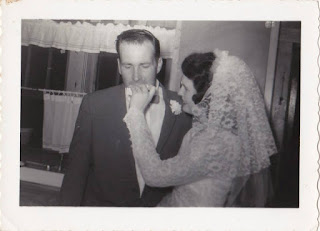 July 2018 marked my parent's 60th wedding anniversary.
November 2018 they gazed into each others eyes for the last time.

The night I took this photo would be the last time I saw my father alive. He died not long afterward. 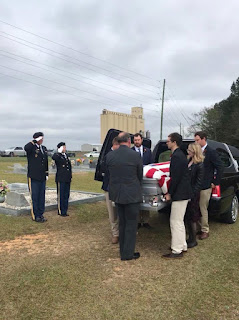 If he was watching, I know my father enjoyed every detail of his wake and funeral. His friends and family made him proud—right down to the ride to the cemetery! 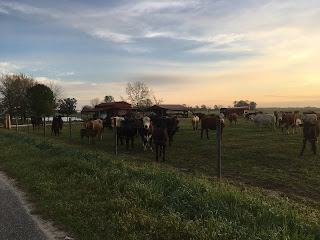 I'm still laughing about the text I received from my cousin saying "I think they're LOST!" No, we took the scenic route per my father's request. He wanted to drive past all his farm land one last time.


A parcel of my father's property is next to the cemetery where he was buried, and as I peered over his casket, I could see my brother's cattle gazing in the distance. Daddy would have appreciated this. He was a large man and had been bedridden for several years, but my brother John and his sons, who live nearby, would get him in the car and drive him around to view his farm. 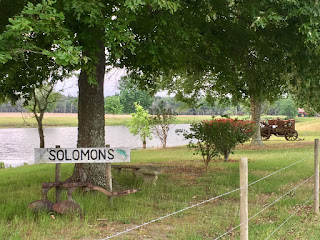 Solomon's Happy Hill Farm was named so by my father. My embarrassed teenage self hated it when he commissioned someone to paint "Happy Hill Farm" in huge letters on the side of our barn. I'm pretty sure I told him there was nothing happy about it!

My childhood home is located in Walnut Hill, Florida, a small farming community in the Florida Panhandle.

Walnut Hill still maintains a lifestyle that many people would find fictional. Its residents are a rainbow of religious and ethnic diversity, and they have always come together to offer support when one of their own dies.

As a child I just took this for granted, but as an adult I understand how rare it is to receive this kind of Christianity from people and churches who actually practice what they preach. 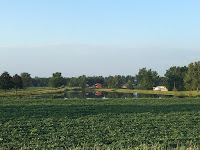 Neighbors began dropping off food immediately. The Walnut Hill Mennonite Church; Atmore, Alabama Church of Christ, where my brother is a member; and Annie Jones United Methodist Church of Walnut Hill, that my parents attend, all provided home-cooked meals for us.

My father had two nephews. One of them is deceased, but his family drove all day just to attend the wake and then had to return right afterward in order to make work the next morning. My mother's brother flew in from North Texas to be there for her. I was hugged by schoolmates and neighbors I hadn't seen since graduating from high school in 1977!

I am so appreciative of all the friends and family who reached out to us during this difficult time.

It is a surreal experience to lose a parent, but my father was ready to die. He died knowing he was surrounded by his wife and his children, which is what he had wanted. I had come home to help my mother through carpel tunnel surgery when my father's health took a turn for the worse. My brother Michael flew in from South Texas. It was evident that my father was waiting for him to arrive. The minute he was able to, he called him by name.

Daddy's body was broken, but his mind and spirit were with us until the end. I often told him "I'd like the mind you have right now, much less when I'm almost ninety years old!" 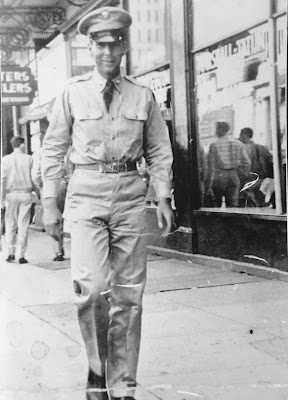 So often today I see Facebook posts where someone has been the recipient of a good deed, and in return let everyone know that they have passed on that good deed to someone else. Which usually gets them a lot of Likes and Loves on Facebook.

As a child it was instilled in me that good deeds only count if you do them quietly, preferably anonymously, and without fanfare. At my father's funeral it became clear that it wasn't just the Sunday school bible verse Matthew 6:1-4 that had imposed this ideology upon me, but watching how my father lived his life.

Reverend Bateman talked about my father's time in Korea. Many of the people present had known my father for a lifetime, but didn't know he had received the Purple Heart or a Bronze Star for valor.

Five years ago we threw my mother a 75th Birthday Party. No mention was allowed to be made that my father's birthday was the day after hers. My mother loved every minute of being the center of attention at her party, but my father was not that kind of guy.

At least not while he was alive. My father would have loved every aspect of both his wake and funeral.

He had told me on more than one occasion that he would like Sammie Moorer to take part in it. Reverend Moorer is a minister of the Walnut Hill Black Community's New St. Paul Baptist Church. Daddy heard him speak at a funeral, and was impressed! He considered him a friend, but we had no idea until Mr. Moorer spoke that my father had encouraged him when it came to his career. He had heeded Daddy's advice and got a better job, one with good benefits, from which he had retired.

Daddy's childhood friend Mr. Wilbur Peters shared how they became friends when he arrived as a boy from the North to be part of the Walnut Hill Mennonite community, and how they reconnected as older men. He shared how Daddy told him that he had been saved as a boy, and was a member of the Walnut Hill Baptist Church, but had fallen off the track. He returned to his faith as he grew older. He had told Mr. Peters he was ready to die.

My sister-in-law, Stephanie Solomon, admitted that her father-in-law was a difficult man to get to know, but an easy man to love. She shared stories about the kind of grandfather he was to her children. The kind of grandfather who had gone through the agony of having his tattoos (not exactly successfully) lasered off, because he regretted getting them and wanted to set an example to his grandsons. So far all the grandsons have heeded his advice.

My son Jordan shared how homesick Daddy and his fellow soldiers had been in Korea, and read a song that they would sing to cheer themselves up.

Vicki Bagget, a family friend, set the tone so very appropriately to what my father would have wanted when she sang a funeral rendition of Dixie.

However, if anything would have brought tears to my father's eyes it would have been seeing his nephew James Earl (Jimmy) Vaughn take the podium to sing "Amazing Grace" as his wife Pat played the piano.

His daughter Gina had been so worried that her dad wouldn't be able to get through the songs he sang, but Jimmy was amazing.

My son Jordan has inherited that ability to speak without breaking down, even during the most difficult times.

These are the words he read:


Apparently there were cuss words in the original version of this song, which my father edited out.

My father had a talent for writing, an ability he passed on to me. One of the things I was most furious with my father about during my college years was when I had him submit a story I'd written to the local Atmore Advance Newspaper. Daddy took the liberty of changing a quote! 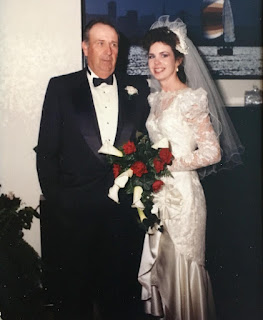 One of my assignments at the University of Florida was to write an article for the hometown paper. So I interviewed a local boy from Walnut Hill who was in Tampa, Florida attending his own college. He said he missed Walnut Hill... like Hell! My father changed hell to heck. He perceived this quote would be an embarrassment to the family of the young man who said it (not to mention the boy himself). I was furious, but I'm finally old enough to appreciate where he was coming from. Today it just makes me laugh!

Like this photo taken at my wedding. I still remember what and who we were discussing. That pleased expression on my father's face was because I had just told him that my brother's date "won't be catching this bouquet!"

My father and I butted heads—ALL THE TIME—and my mother would say it was because we were just alike. It took me all of my childhood and most of adulthood to realize what a compliment she was paying me.

I will miss listening to my Daddy's stories, his views on politics, his ability to keep a secret, and even our arguments, but most of all his love for me—that will be irreplaceable.

As is my daddy. 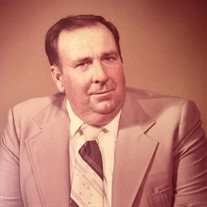 On behalf of the Solomon Family I would like to thank all of you who reached out during this difficult time.

Amelia Solomon Frahm
Posted by Amelia Frahm at 9:23 AM 2 comments: