Train Ride to Heaven: A Love Story about Living, Dying and ALS.

Today I have the privilege of posting my review for a memoir written by a school friend: 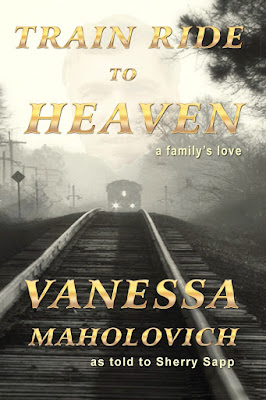 Train Ride to Heaven is author Vanessa Maholovich’s heart-rending memoir about her husband Glen’s fatal struggle with Amyotrophic Lateral Sclerosis  (ALS) or what is better known as Lou Gehrig’s Disease. Emotionally it was not an easy read for me, which is why I could not put it down.

Vanessa and Glen Maholovich and I went to school together. They graduated in 1975, just two years ahead of me, and I grew up in the same rural Alabama-Florida panhandle communities that Vanessa so thoughtfully details in her book.

When I think of Glen Maholovich I still picture that curly-headed (afro curled perms were the style, but his was all natural) boy, running off the football field after a game, grinning. Everyone knew he was searching for Vanessa, who would be waiting on the sidelines to embrace him.

Vanessa’s memoir made me homesick for the people and places I left behind all those years ago. It made me laugh, and it made me cry as I reflected on those optimistic, unjaded children we once were before life experiences -and diseases like cancer and ALS- turned us into grown-ups.

In her memoir Vanessa describes Glen as smart, imaginative, innovative, and funny, the type of person whom everyone liked and no one had a harsh word for; she could just as easily have been describing herself. I would also add that they were unpretentious.

They were those rare high school sweethearts that everyone liked because both individually and as a couple they were kind, considerate, and thoughtful to all their peers. If Hallmark made their story into a movie it could conceivably be the first time Hollywood actors were not more alluring than the people they portray.

Facebook did not exist back when we graduated from high school, and prior to it I could count on one finger the number of school chums I had kept in contact with.  It had been decades since I had seen Vanessa, but my parents still resided in the panhandle community of Walnut Hill, Florida, and it was my good fortune to run into her on a visit home.  She expressed such joy that we had bumped into each other and it was a pleasure to reconnect. I had no idea that Glen had only recently died, nor what they had gone thorough until much later, when I read her book.

Train Ride to Heaven first came to my attention via my Facebook feed! It was such a profound moment when the book arrived and I saw Glen’s face superimposed on the cover. It now resides on my bookshelf alongside other books I cherish.

As someone who has a cabinet full of journals with significant gaps in their dates, I am in awe of how Vanessa managed to juggle her career as a professional nurse and her responsibilities as Glen’s caregiver and still have the energy to write.  I know how tired she must have been and can appreciate how difficult it was to maintain a journal when the plans and dreams she had hoped to chronicle vanished.

As an author and cancer survivor, I understand what compelled her, and the resolve and commitment it took to see her memoirs published.  It is one thing to keep a journal, but it takes strength and courage to allow the world a glimpse inside your private pain, and her book deserves our reverence.

In Train Ride to Heaven Vanessa gives her readers a blunt account of what her self-described ordinary family goes through during her husband’s battle with ALS.  She does it with humor, humility, and grace. Despite everything Glen goes through, Vanessa makes sure his dignity remains intact, and permits her readers to see the larger-than-life man she loved; not an incapacitated invalid

She makes it obvious that she did not pen this tribute to Glen to solicit pity. Instead her prose beseeches all of us to recognize the solace, humor, and love that are found in the worst of times, and to be grateful for them. 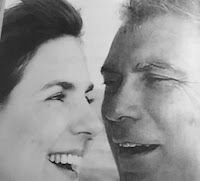 Train Ride to Heaven is an inspiring read for any caregiver, and for families struggling with ALS, or any other catastrophe.  However, it is much more than a memoir about an ordinary family’s inspirational journey with a fatal disease; at its core this book is a love story.

In the book's touching epilogue Vanessa addresses the poignant questions she asked herself when she realized she was falling in love again after Glen's death. Her answers- like her book- are wise and full of heart.

Despite the sorrow and inevitable outcome her memoir chronicles, readers will be unable to resist yearning for what Vanessa and Glen Maholovich had. They may have been ordinary people living a small town life, but theirs was an extraordinary love story and it is evident on every page of Train Ride to Heaven.

Vanessa Maholovich is a Registered Nurse. In 2015 she was chosen "Best of the Best in Nursing" by the residents of the Atmore, Alabama community where she worked and lived. Today she has remarried and resides in Tuscaloosa, Alabama, with her husband Barry Carden.  She continues to work as an RN and is persuing becoming a Certified Caregiving Consultant.

Sherry Sapp is a freelancer who writes for newspapers and magazines; this was her first book. According to Vanessa, " I shared my story and writing with her, and she brought my words to life. I could not have done it without her!" Sherry Sapp resides in Pensacola, Florida. 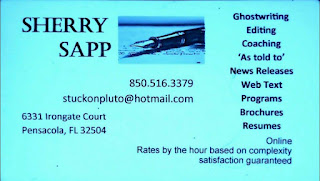 Posted by Amelia Frahm at 7:33 PM No comments: