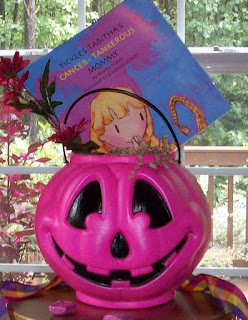 My life since cancer is like a TV sitcom. One of those ridiculously funny episodes the audience thinks has to be a fabrication.

Only in my case it’s not.

October is Breast Cancer Awareness Month, and the witch at Frahmhaus (that would be me) is reveling in the magic of mammograms, plastic surgery, and pink pumpkins!

Tickles Tabitha's Cancer-tankerous Mommy was released October 2011, and since then the month of October has been filled with orange Jack-o-lanterns, pink pumpkins, and the type of laughter found at insane asylums.

After all, October is the month for tricks and treats. I’d bet that was not lost on the soul that selected it to be Breast Cancer Awareness Month. Breast cancer -like Halloween- can be tricky. 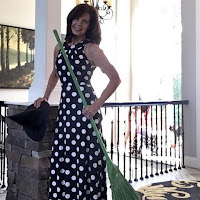 It has been 23 years since my breast cancer diagnosis, and I had never felt better...until I went to put on the dress you see pictured here, and discovered one of my implants had ruptured.

I'm a good example of why early detection is important, and breast cancer survivors should never get too smug. Breast cancer likes to sneak up on you, and remind you of how scary life could be. Recurrence is always an option.

I spent early October doing the walk of shame into a plastic surgeon's office, where I had to confess my mammogram was overdue.

I'm spending the latter part of October recuperating from surgery, grateful that my mammogram showed nothing worse than a ruptured implant, and aspiring to outlive the new ones!
Posted by Amelia Frahm at 9:55 AM 1 comment: